Get your delicious dose of gooey, cinnamon goodness when you whip up this Homemade Monkey Bread recipe. Bread dough, melted butter, cinnamon, and pecans combine to make a perfect, addictive dessert. Enjoy it for dessert, or completely rock your breakfast or brunch crowd. 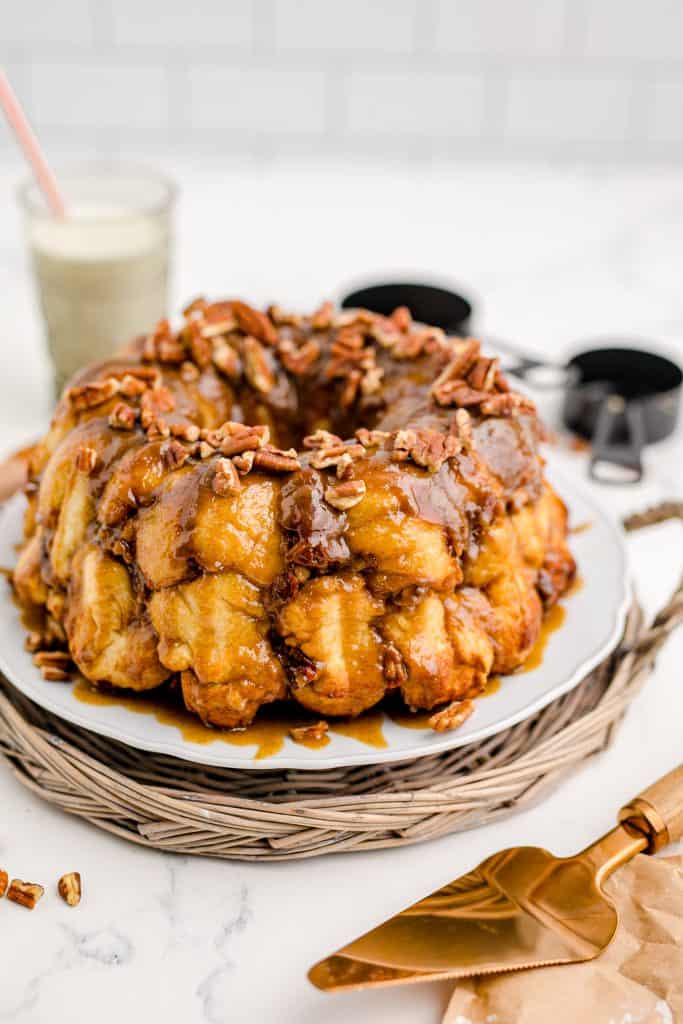 I absolutely love bread. It’s such a universal food that’s always a comforting experience. For example, a good soup can be enjoyed with some Garlic Cheese Biscuits or even a slice of Guinness Beer Bread. You can wake up in the morning and enjoy a delicious Maple Oat Scone. You can go to bed enjoying a snack of English Muffin Bread. So many options for every occasion. 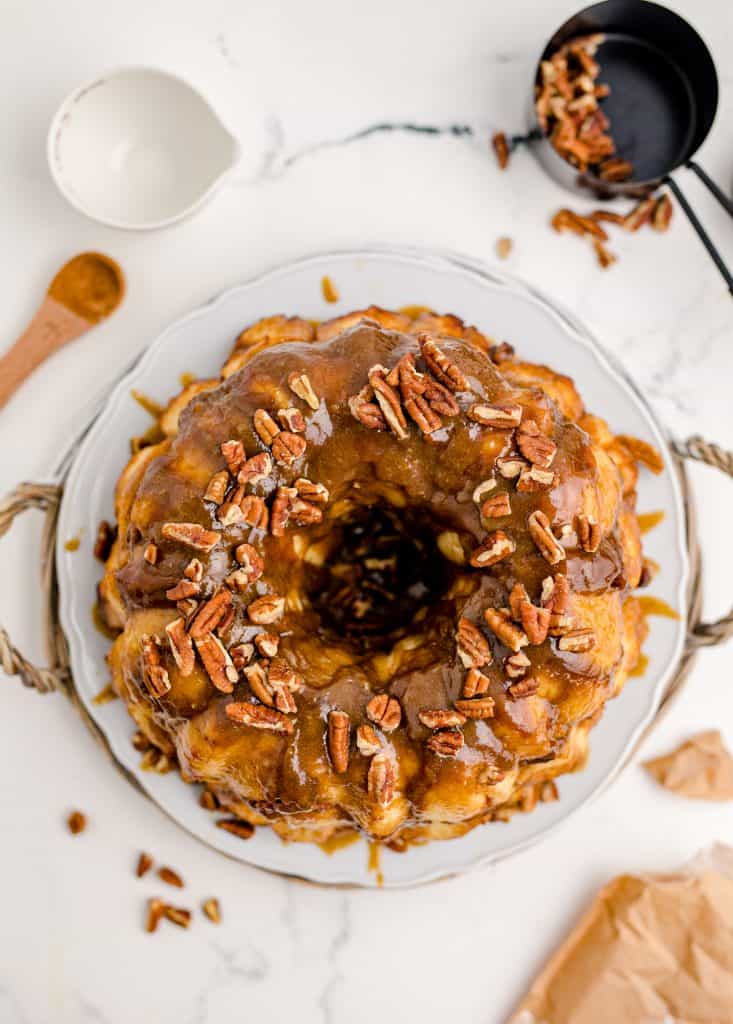 I don't think I’ve ever met one person who disliked bread. There's bread out there for everyone. I know, sounds strange, but I’m not wrong, you have to admit that. Homemade Monkey Bread is just another one of those favorite bread recipes that's popular throughout the world. If you’ve never had it, here’s your chance to enjoy one delicious and addictive recipe. 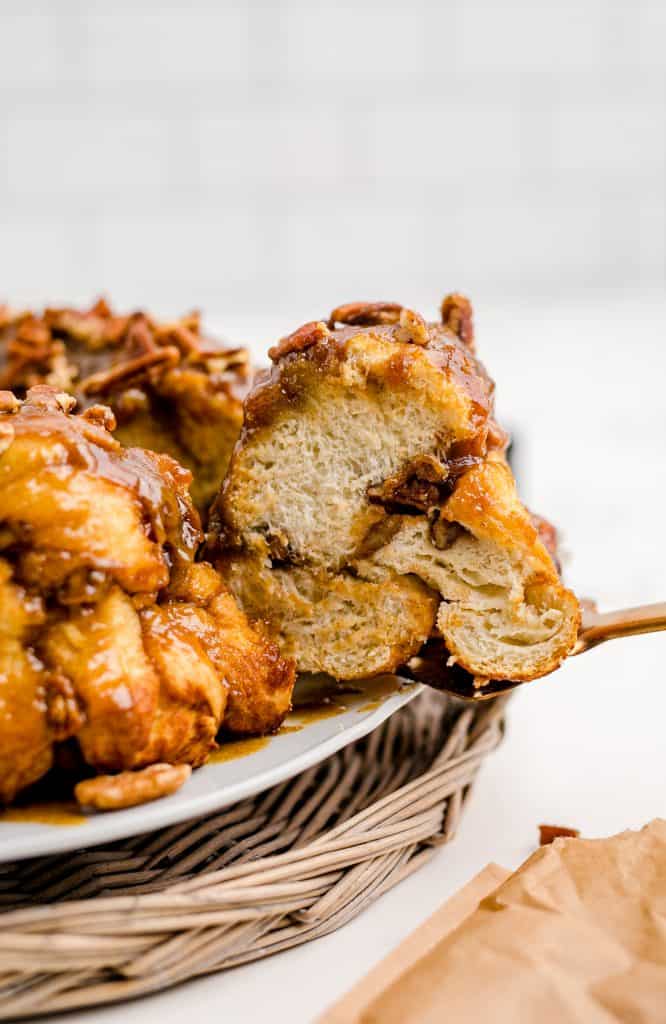 Why Do They Call it Monkey Bread?

If you’ve ever had monkey bread, you know it’s common to just use your fingers to pull a piece off. It’s actually known as a pull-apart bread for this reason. The entire recipe itself is created to make it easy to just pull off a piece or two at a time, in bite-sized portions. Monkeys are known for using their hands to just reach out, grab something, and start chewing on it. For this similarity, the bread gained its name. 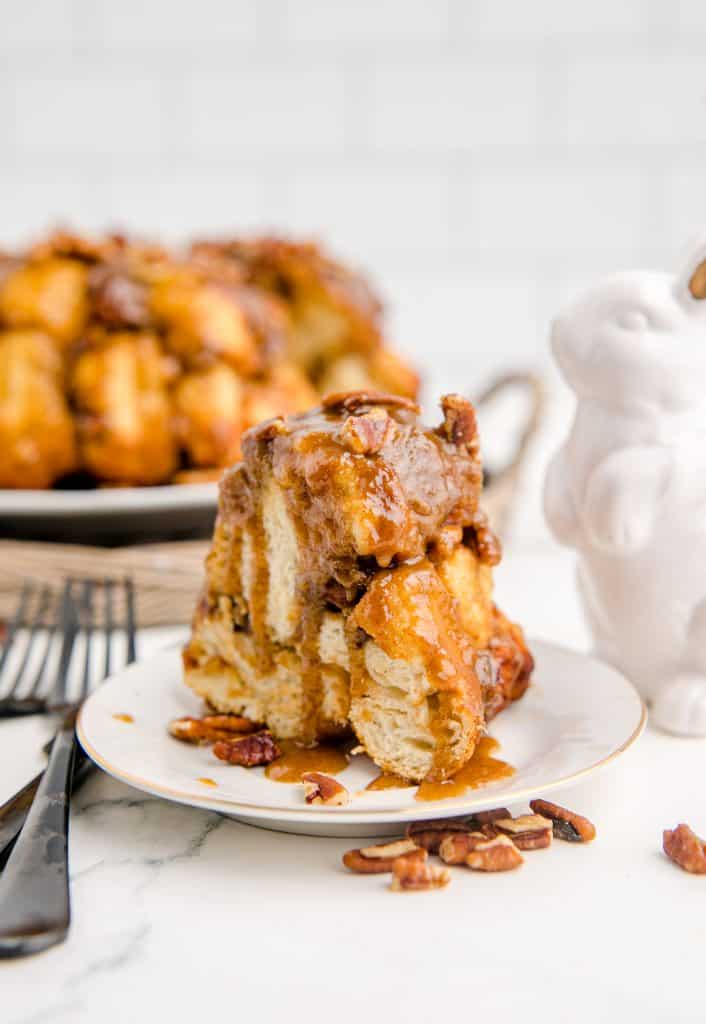 However, there are some other theories on how it got its name and how the bread was invented, but there’s no supporting evidence to say any one theory is the correct one. 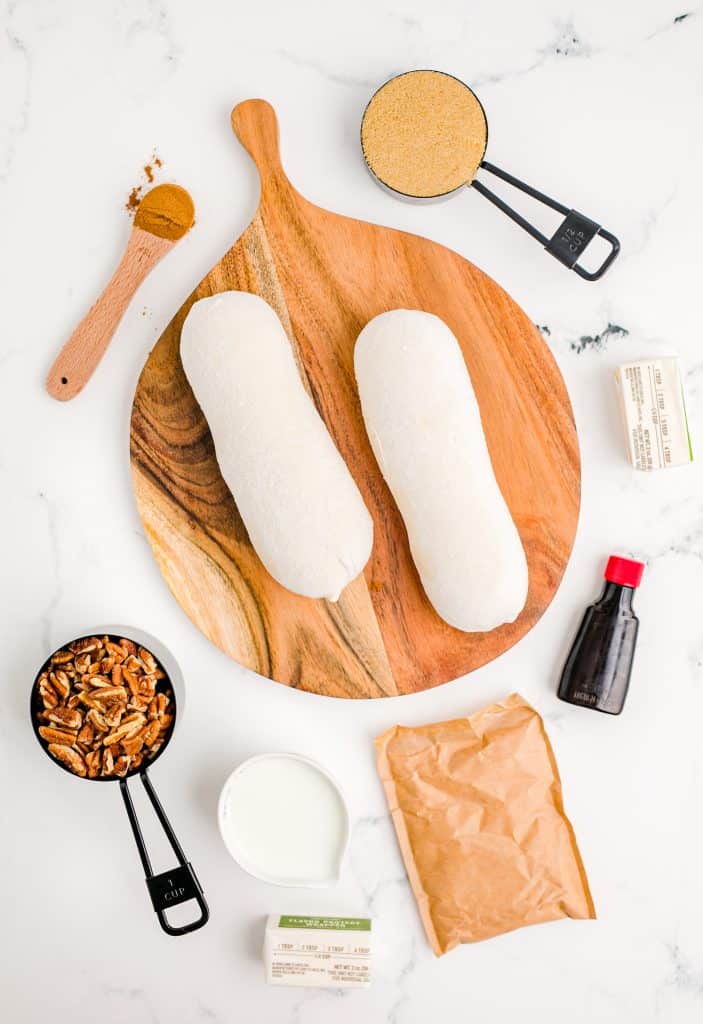 How Do You Make Monkey Bread from Scratch? 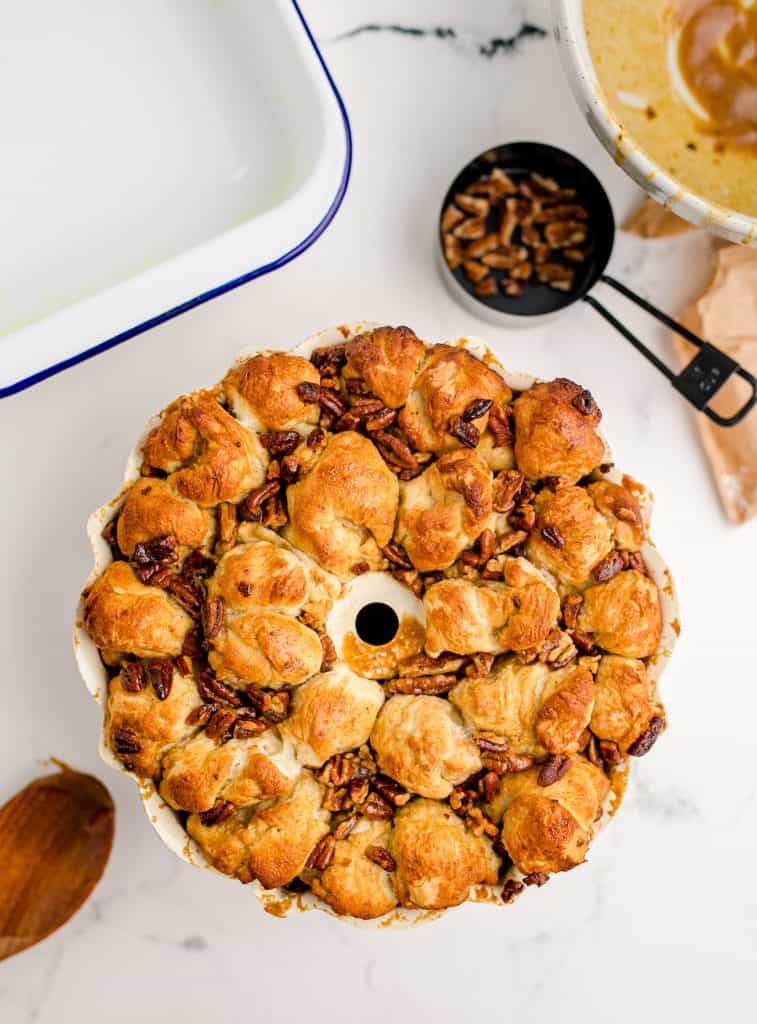 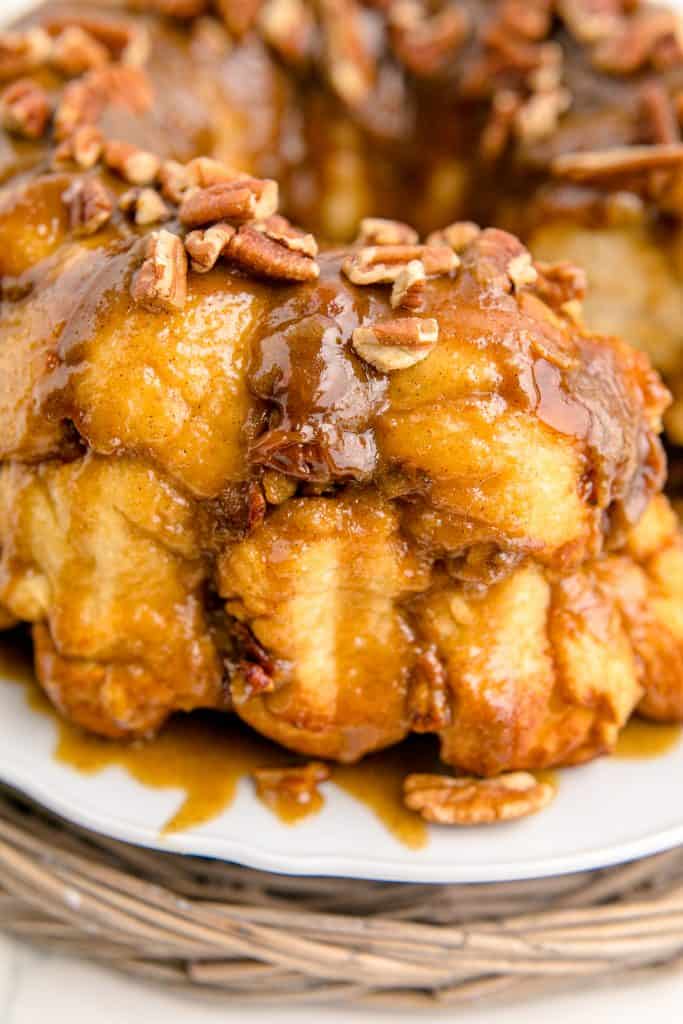 Please feel free to share your experience with making this Monkey Bread recipe in the comments below or on social media! 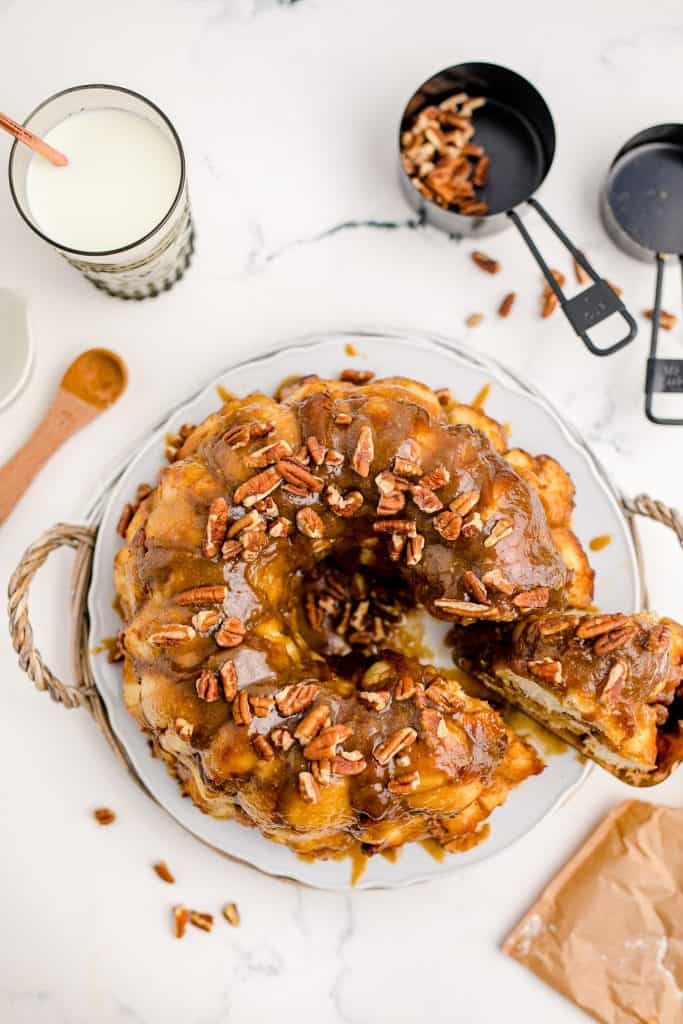 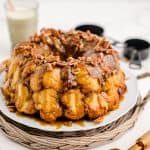 *If you are like me and LOVE sauce, when your monkey bread is just out of the oven and cooling, you can throw ½ cup brown sugar, ¼ cup butter, 1 Tablespoon cinnamon, and 1 teaspoon vanilla in the same mixing bowl you made the sauce in then combine and heat through in the microwave. Once it's all melted together and you have plated your bread, just drizzle on before serving.
*If you don’t eat or like nuts, no problem! Just leave them out of the recipe, the monkey bread will be just as delicious without them!