If you love lemon and you love brownies, you’re going to love these Lemon Brownies. With the classic texture of brownies, this dessert adds an extra zing of lemon as a twist. A soft and lemony treat that basically screams summer in a pan. 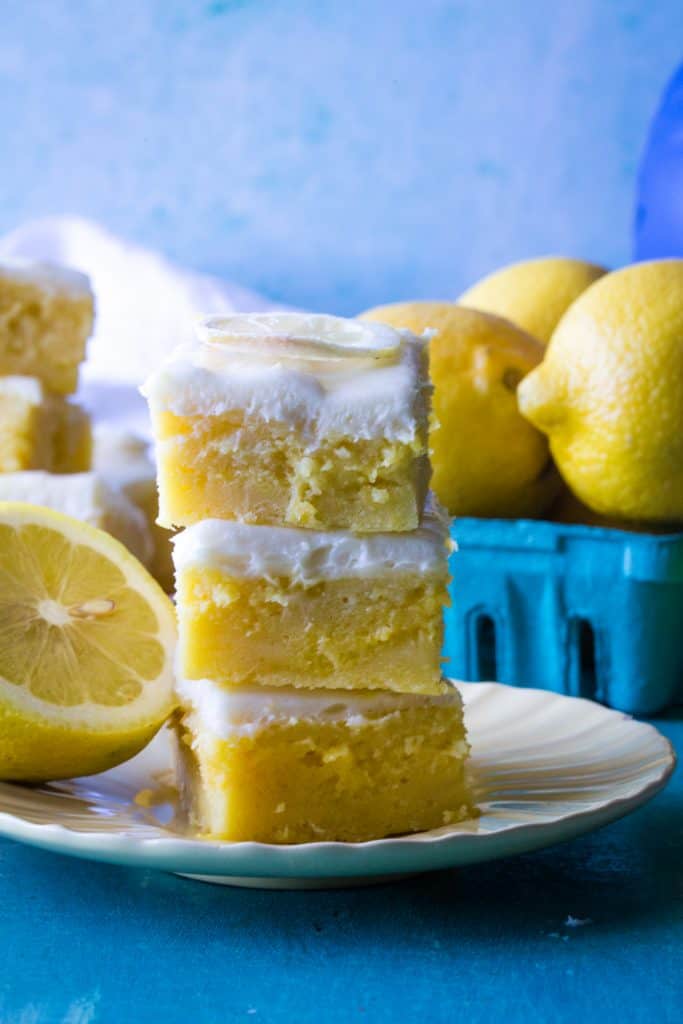 These Meyer Lemon Brownies are definitely a recipe I’m proud of. If classic lemon bars married brownies and then the lemon bars had an affair with cheesecake, these lemon cream cheese brownies would be the resulting love child. They’ve been a huge hit across my family, friends, coworkers, etc. Plus, they’re extremely easy to toss together while still resulting in a jaw-dropping delicious and impressive dessert. 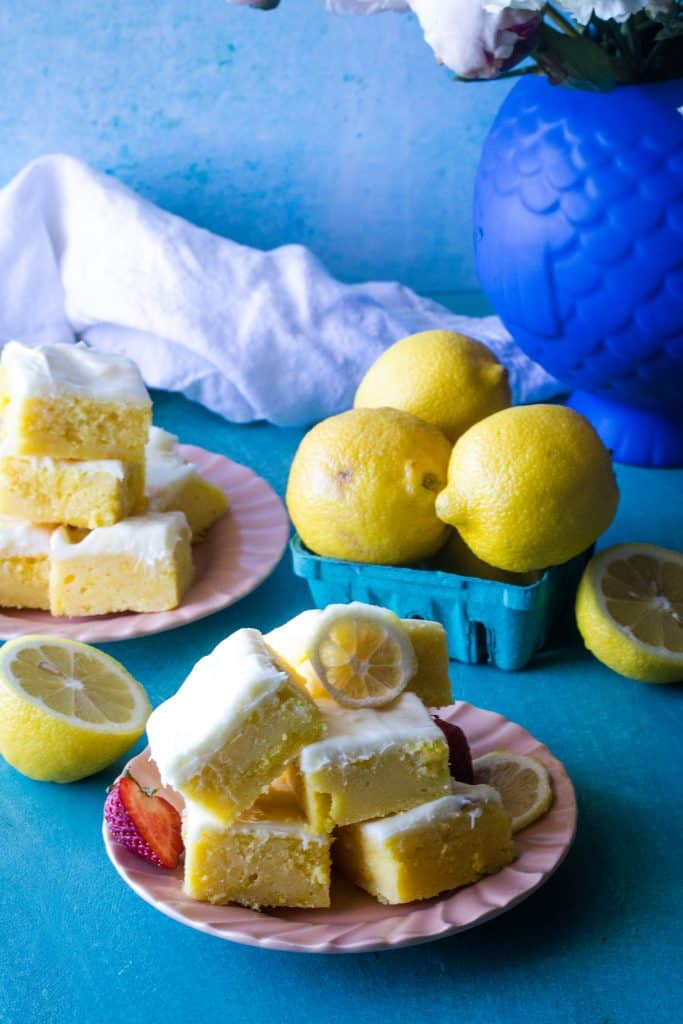 I adapted this recipe from Rita’s Recipes because the first time I tried it, I melted. I was seriously impressed with how easy the Meyer lemon bar recipe was, but how mind-blowing they turned out. There are many factors that make these lemon cream cheese brownies perfect however, the most noticeable aspect is that the tartness isn’t overwhelming. Some lemon desserts can really hit you in the face when the tartness hits. These lemon brownies have plenty of lemon flavor, but it’s so light at the same time that it’s addicting. 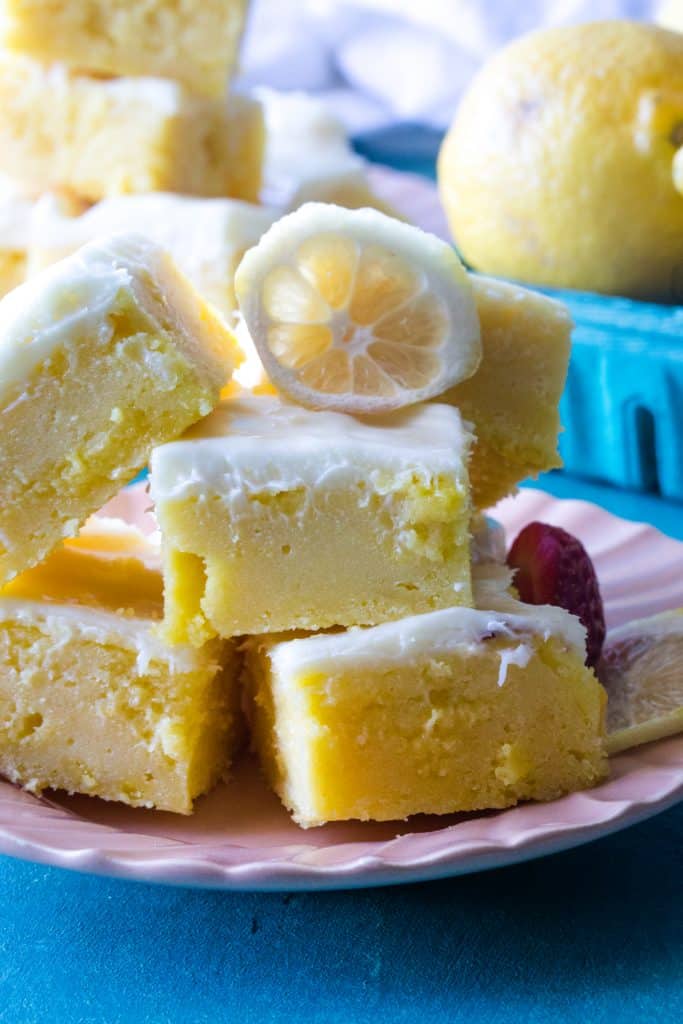 How to Make Lemon Brownies 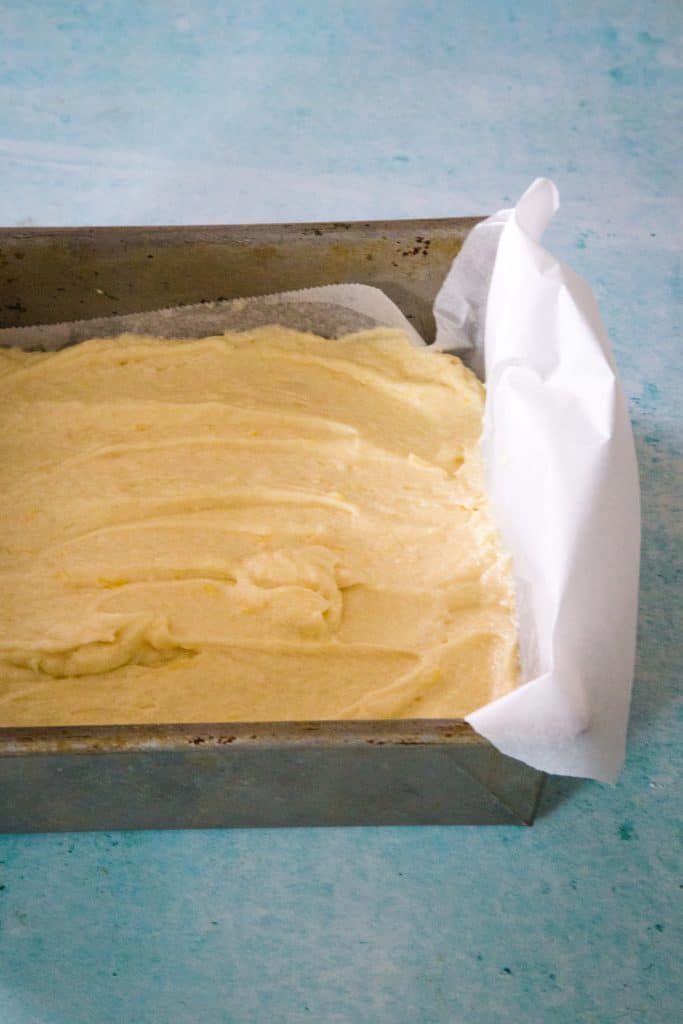 In a bowl, beat butter and sugar until fluffy. Add one egg at a time to the mixture and fully mix in each egg until all eggs have been incorporated. Add the lemon juice and zest to the mixture and stir until combined. Mix in flour and salt and stir until fully combined. Pour into a greased brownie pan (9x9) and bake for 20-25 minutes at 350 degrees. Remove from oven and let cool completely. 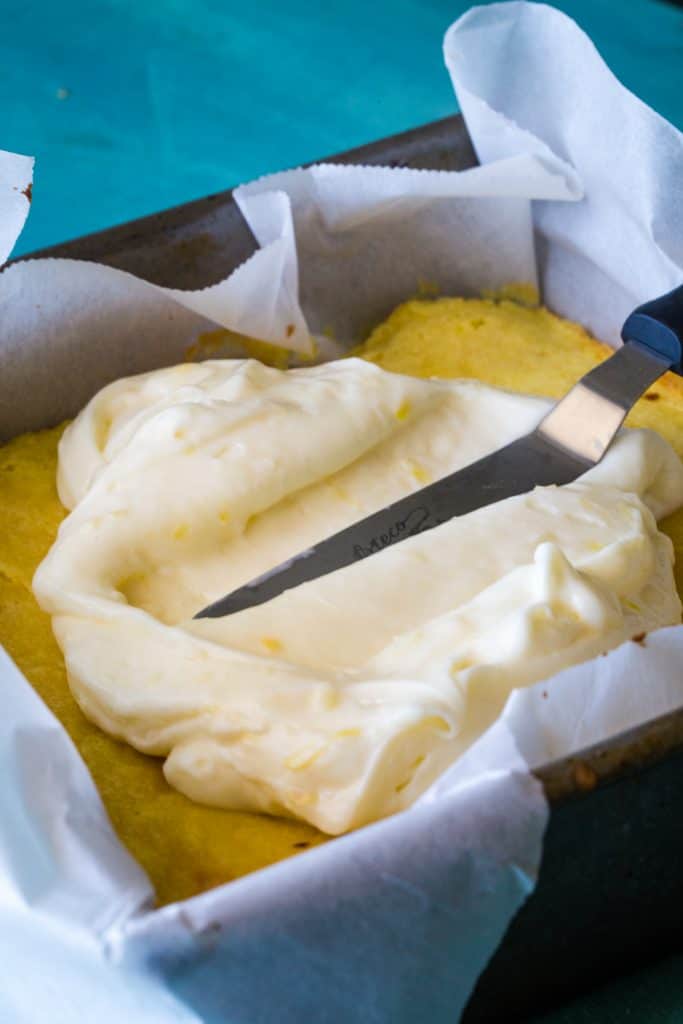 In a bowl, mix together cream cheese and butter until it’s nice and fluffy. Beat in powdered sugar, milk, and lemon zest. Beat the mixture for about 5 minutes. Pour the mixture over the top of the cooled brownies and let stand for at least 30 minutes. 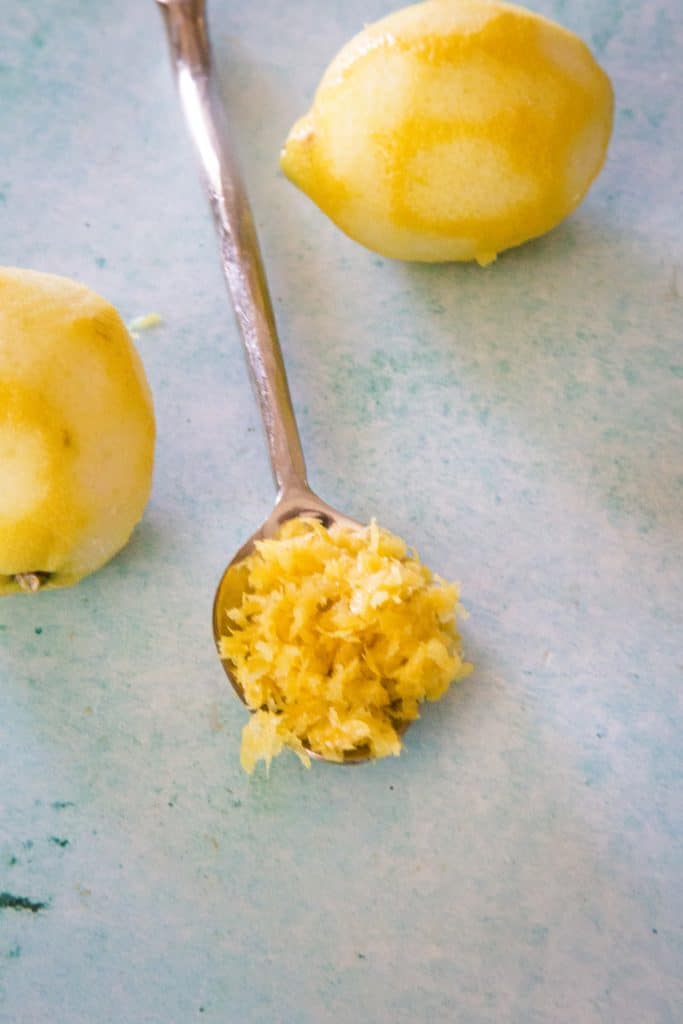 This recipe can be mixed by hand however, it’s easier if you have a stand mixer, as the ingredients will come together much quicker that way.

If you’re not a huge frosting fan, you can skip the frosting altogether since this meyer lemon brownie recipe is delicious without it as well. 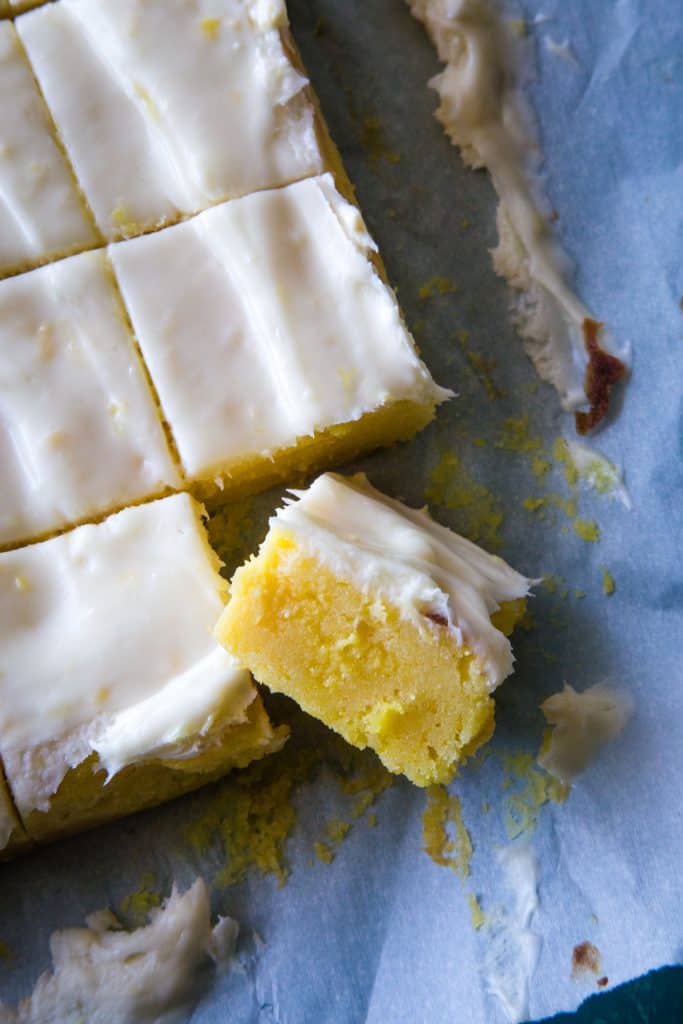 Be sure to let your Meyer lemon brownies cool fully before adding the frosting over the top. Not only will it take longer for the frosting to setup, but it will make it extra runny or thin. This results in a very thin frosting. They will still taste good, the frosting just won’t be as thick as seen in the photos.

Do I Need to Refrigerate Lemon Brownies?

You shouldn’t have to refrigerate these Meyer lemon brownies. However, if you want them to last longer, you can definitely store them in the fridge. Due to the specific ingredients they contain, storing them in a cool place will definitely allow them to stay fresh longer. I wouldn’t suggest freezing these bars. Based on their components, they most likely would come out soggy with an altered texture. 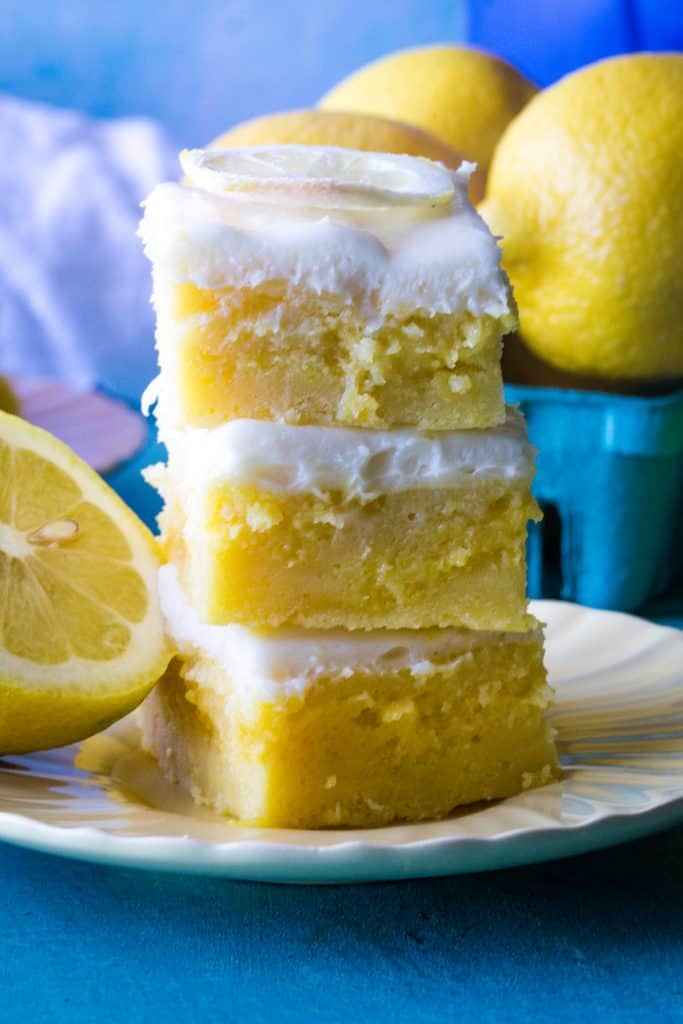 Should Brownies Be Gooey in the Middle?

Depending on your brownie recipe, some brownie recipes may be slightly gooey. This is especially common with extra fudgy brownies. However, in general, your brownies really shouldn’t be gooey. If they’re specifically gooey in the middle, odds are, they’re underbaked and need to be put back in the oven for a few minutes. The best way to check to see if most brownie recipes are done is to insert a toothpick in the middle and if it comes out clean, you’re set to go. 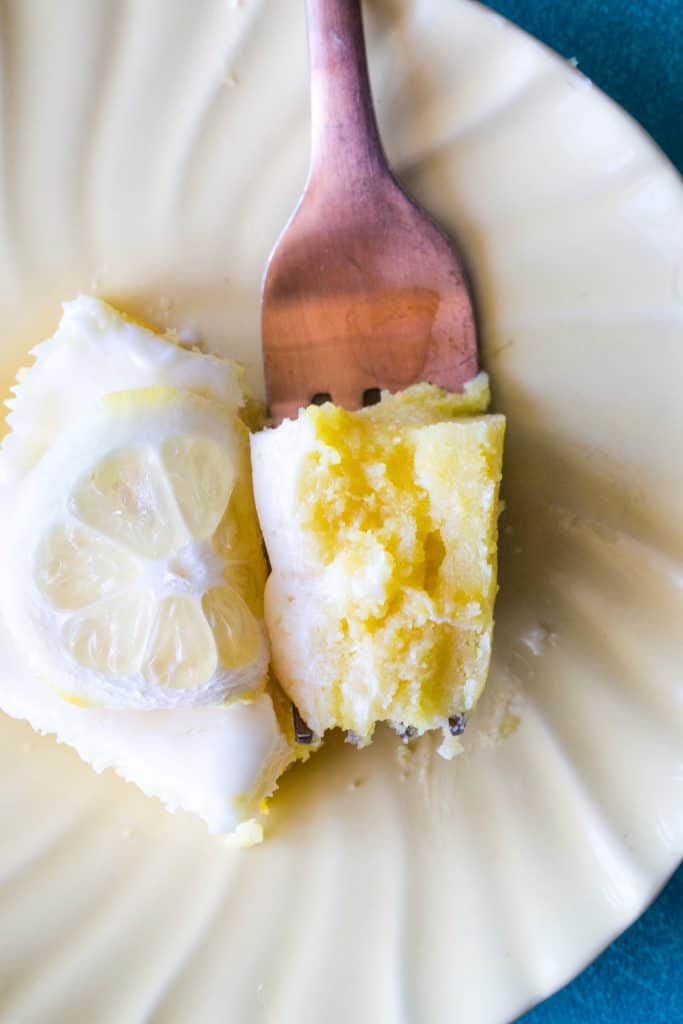 If you’re in love with the flavors of lemon and summer, you’re sure to love these Lemon Brownies and so will your friends and family.

If you love lemon and you love brownies, you’re going to love these Lemon Brownies. With the classic texture of brownies, this dessert adds an extra zing of lemon as a twist.