These Pumpkin Snickerdoodle Cupcakes are the perfect fall treat! They are a delicious combination of two classic fall flavors- pumpkin and cinnamon. They are fluffy, moist, and made with a pumpkin puree then topped with cinnamon sugar frosting. They're perfect for a Halloween party or any other fall gathering.

I've always been a huge fan of the delicious cinnamon and sugar mixture. Growing up, my family would sprinkle it on toast spread with melted butter for a quick afternoon snack. I think it's because of this that I love cinnamon recipes. From Snickerdoodle Blondies to Cinnamon Cupcakes to Snickerdoodle Pumpkin Muffins, I just can't get enough!

If you like pumpkin and snickerdoodle-flavored goodies, then these cupcakes are for you. They have a light and fluffy pumpkin cake base with a cinnamon sugar topping, just like a traditional snickerdoodle cookie. These cupcakes are perfect for all holiday gatherings or as an after-school treat.

I get so excited when it's fall because I associate this season with pumpkins. With Halloween around the corner, you can make these Pumpkin Cinnamon rolls with brown sugar cream cheese frosting and Pumpkin Flan Cake with all the excess pumpkins.

Watch the video below to see how we made these cupcakes!

WHY YOU WILL LOVE THESE CUPCAKES

Detailed measurements of ingredients are in the full recipe card at the bottom of this post.

How to make Pumpkin Snickerdoodle Cupcakes

Can I use this recipe to bake a cake instead of cupcakes?

Yes absolutely. You will have to adjust the cooking time depending on the thickness of the cake. Depending on how big you want your cake to be, you can double the measurements and adjust accordingly.

How many cups will this recipe make?

This recipe makes 2 dozen frosted cupcakes. You may have a bit of leftover frosting depending on how you frost the tops of the cupcakes.

My cupcakes rose but sank afterward. What could be the cause of this?

Different factors can cause this:

Can I use homemade pumpkin puree?

Yes, you can use homemade puree and it's so easy to make. Just bake the pumpkin with seeds removed then once fully cooked, scoop it out if it was baked with skin then blend that till it's smooth.

What causes my cupcakes to overflow?

Too often the culprit will be a leavening agent. If the recipe provides scale weight then try to follow as per the recipe guide. Another reason could just be that you filled up the cupcake liners more than the recommendation of ½ to ⅔.

These cupcakes will stay in the fridge for up to 3 days. Put them in an airtight container cause they can easily absorb the smell of other foods in the fridge.

You can freeze the cupcake but without the frosting. Put them on a baking sheet then only when they are frozen you can transfer them to a ziplock bag. So ideally when you are baking for a function that is a few days away, you can bake the cupcakes and then allow them to cool completely before putting them in the freezer. The frosting will have to be done on the same day or you can store it separately in the fridge.

If you loved these Pumpkin Snickerdoodle Cupcakes you might want to try these Cupcake recipes as well. 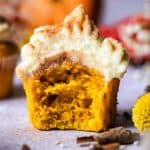 These Pumpkin Snickerdoodle Cupcakes are the perfect fall treat! They are a delicious combination of two classic fall flavors; pumpkin and cinnamon.