This Cinnamon Roll Monkey bread is pull-apart perfection. Canned biscuit pieces are tossed in cinnamon sugar before being topped with lashings of homemade caramel. Thirty minutes in the oven later, you’ll have an irresistible breakfast feast.

Looking for a way to get lazy teenagers out of their beds at lightning speed? This Cinnamon roll Monkey bread will do the trick. No one, and I mean not even the elusive-before-midday teenager can resist the smell of this buttery, cinnamon sweet treat.

Now I love cinnamon rolls and I love homemade monkey bread, but as the days get busier, I find myself with less time to spare in the kitchen. Traditional cinnamon rolls are made using a sweet yeast dough that requires at least a 30-minute rise time, so I needed a speedy solution. Enter, bought cinnamon roll dough.

While I usually always advocate for making from scratch over store-bought, by using cans of Pillsbury Grands Cinnamon Rolls I’ve saved myself time, effort, AND washing up. Who can argue with that? By cutting the dough and rolling it into balls, the pieces bake into one another in the pan but don’t fully merge. This makes the signature, pull apart texture and perfect breakfast.

As the canned biscuit dough also doesn’t contain yeast, there is no resting time. The biscuits, however, bring an irresistible texture that absorbs the homemade caramel sauce beautifully. Pulling it apart reveals golden ribbons of pure joy that are guaranteed to make the whole family smile.

When this time of year can feel chaotic as we rush through between to-do lists, visitors and events this is the perfect recipe to remind us to slow down, gather and share. Whether you make it for Christmas morning breakfast or next weekend, there is something undeniably special about the whole family sharing from the same plate. It’s the same reason I love cinnamon twist bread  - it brings people together and is a guaranteed conversation starter. The fact that it's one of those easy recipes with irresistible flavor is just a bonus.

WHY WE LOVE THIS EASY CINNAMON ROLL MONKEY BREAD RECIPE

RECOMMENDED TOOLS TO MAKE THIS RECIPE

HOW TO MAKE THIS CINNAMON ROLL MONKEY BREAD RECIPE

This cinnamon roll monkey bread is irresistibly easy. Coat the biscuit pieces in a cinnamon sugar, chuck them in the bundt pan with homemade caramel, bake for thirty minutes and enjoy! Good job it’s quick to make as your family will be begging for this breakfast every single weekend!

2. Add the white sugar to a large ziploc bag or a medium bowl, followed by ½ cup of the brown sugar and the cinnamon.

3. Separate the quartered biscuits then add ⅓ of them to the bag. Seal the bag and shake to fully coat biscuits. PRO TIP: Alternatively, you can add the sugars and cinnamon to a plate and roll the biscuit pieces in the mix, making sure to coat evenly.

4.  Add the sugar coated biscuits evenly into a well-greased bundt pan. Continue the sugar coating process with the remaining ⅔ until all biscuits are done and added to the pan.

5.  In a medium saucepan over medium heat, melt butter then add in the remaining brown sugar followed by the vanilla.

6.  Let cook, while occasionally stirring for a few minutes, until the mixture starts to become lighter and almost frothy (around 10 minutes.)

7.  Remove from heat, then slowly whisk in the cream and a pinch of salt.

8.  Immediately pour the melted caramel mixture over the biscuits. Making sure to coat dough pieces evenly.

9.  Bake in the oven for 30-35 minutes, or until the tops begin to look slightly crisp and edges are golden brown.

10.  Remove from the oven, allow to cool for 5 minutes before carefully flipping the bundt pan onto a very large plate, allowing the monkey bread to slide out. PRO TIP: For best results, do not let the monkey bread cool for too long in the pan otherwise you risk it sticking and falling apart. Invert the pan onto a serving plate.

11. Drizzle Pillsbury glaze over the top of the monkey bread.

Cinnamon roll monkey Bread tastes best eaten fresh so make it when there’s plenty of mouths to feed (this recipe serves 8!) or when you’re reaaally hungry.

As mentioned, monkey bread is usually enjoyed as a pull apart bread. The action of pulling it apart and eating it in small bites using your hands, is said to imitate the way in which monkeys also eat. Another theory is that it’s similar to the way monkey’s groom each other – picking out the debris from each other's fur to eat, using their hands. I think the first sounds slightly more appetizing!

Do I have to use a bundt pan for monkey bread?

No! As long as the pan is deep you can use any kind of pan for monkey bread. This includes a cake pan, sheet pan or even individual monkey bread muffins. You may need to reduce or increase the cooking time depending on your choice of pan.

How to make cinnamon roll Monkey Bread in the instant pot

For super moist cinnamon roll monkey bread, you can also make it in the instant pot instead of the oven. This creates a more steamed pudding texture and is a great alternative if your oven is busy baking other items!

To make cinnamon roll monkey bread in the instant pot:

MORE BREAD RECIPES YOU MAY ENJOY 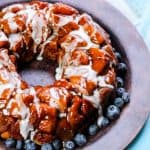